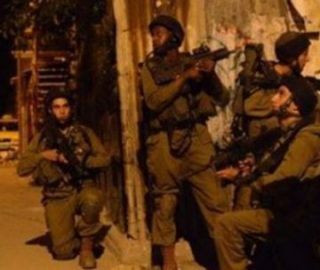 Israeli soldiers kidnapped, on Monday at dawn, six Palestinians from the northern West Bank district of Jenin, four of them after stopping them at a military roadblock on the Nablus-Ramallah road.

The soldiers also kidnapped a former political prisoner, identified as Ramzi al-Qneiri, from  his home in the Jenin refugee camp.

The invasion into the camp led to clashes between the soldiers and local youths, who hurled stones and empty bottles at the army vehicles, while the soldiers fired gas bombs, concussion grenades, and rubber-coated steel bullets.

In addition, the soldiers kidnapped four Palestinians from Jenin and nearby Qabatia town, after stopping them at a military roadblock on the main Ramallah-Nablus road, and took them to an interrogation center.

On Monday morning, the soldiers installed a roadblock at the western entrance of Hebron city, in the southern part of the West Bank, stopped and searched dozens of cars, and inspected the ID cards of the passengers.