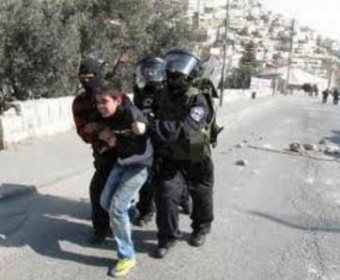 Israeli soldiers kidnapped, on Tuesday evening, four Palestinians, including two children, in occupied Jerusalem, and in the central West Bank district of Ramallah. One Palestinian was kidnapped while attending his brother’s trial in a military court.

Nasser Abu Qous, the head of the Jerusalem Office of the Palestinian Prisoners’ Society (PPS), has reported that the soldiers invaded homes in Old City, searched them, and kidnapped two Palestinians.

He added that the kidnapped Palestinians have been identified as Jamal al-‘Akkawi and Marwan al-Hashlamoun. They were both moved to the al-Qashla interrogation center, in the Hebron Gate area.

The two were taken prisoners following clashes that took place in the town, after several army vehicles invaded its Western area. The soldiers also fired live rounds, and confiscated a Palestinian car.

In related news, the soldiers kidnapped a young man from Ya’bad town, south of the northern West Bank city of Jenin, while attending his brother’s trial in the Salem military court.

The Palestinian Prisoners’ Society said the kidnapped Palestinian has been identified as Mohammad Kamal Razzi, 25.