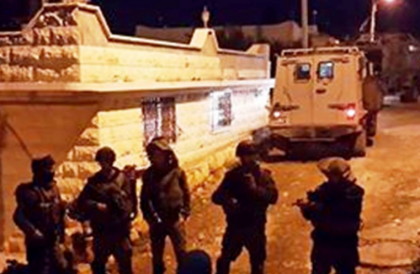 Rateb Jabour, the media coordinator of the Popular Committee against the Wall and Colonies in Hebron, said the soldiers invaded Yatta town, south of Hebron, searched homes and kidnapped two Palestinians, identified as Atef Raba’, 42, and Issa Talab Abu Fanous, 37.

Jabour added that the soldiers also invaded a mosque and a graveyard in Deir al-Hawa neighborhood, in the town, and searched them.

In Hebron city, the soldiers installed several roadblocks on its northern and southern roads, in addition to the main road leading to Sa’ir town and the al-Fawwar refugee camp, before stopping and searching dozens of cars.

In Beit Ummar town, north of Hebron, army vehicles invaded an agricultural belonging to Mohammad Ahmad Abu Ayyash, and bulldozed parts of it, in order to expand a road and install a military tower.

Jabour stated that the soldiers bulldozed the land, two meters wide for a distance of 40 meters long, close to the main entrance of Beit Ummar.

Furthermore, the Palestinian Prisoners Society (PPS) in Ramallah, in central West Bank, has reported that the soldiers have kidnapped, on Monday at dawn, three Palestinians from Beit Rima town, north of Ramallah, while one Palestinian from the town was kidnapped near Bethlehem.

On Monday at dawn, dozens of soldiers invaded different parts of the northern West Bank city of Jenin, searched many homes and property, kidnapped six Palestinians and wounded one.

Also at dawn, the soldiers invaded the West Bank city of Bethlehem, searched homes and kidnapped two Palestinians, while one Palestinian was kidnapped near Hebron, on Sunday afternoon.