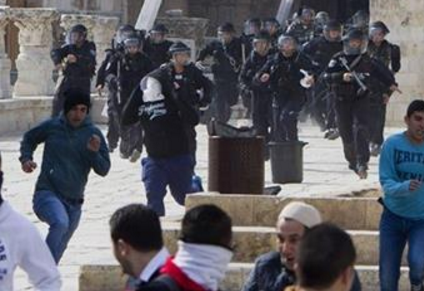 soldiers kidnapped, Sunday, two young Palestinian men near Bab al-Qattanin, leading to the Al-Aqsa Mosque, and a third Palestinian near the Sahara Gate, in occupied Jerusalem.

The Palestinian Prisoners Society (PPS) said the soldiers stopped the two Palestinians, and interrogated them, before moving them to a detention and center in the city.

The incident took place after groups of Israeli extremists conducted provocative tours in the courtyards of the Al-Aqsa Mosque, through the Magharba Gate, while accompanied by dozens of soldiers and police officers.

The extremists started dancing and chanting provocatively in the courtyards of the Mosque, before several Palestinians tried to step them.

The PPS added that the soldiers also kidnapped another Palestinian in the Sahera Gate area, one of the gates of the Old city, and took him to the police station in Salaheddin Street.