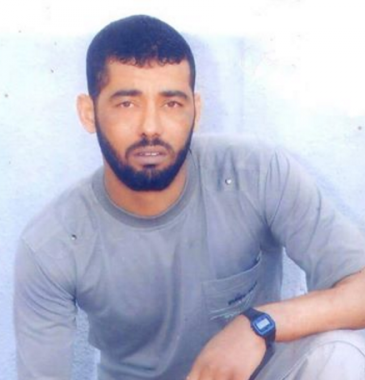 The Palestinian Prisoners’ Center for Studies (PPCS) reported Sunday that a Palestinian detainee died from a stroke he suffered in the Ramon Israeli Prison, before he was moved to Soroka hospital.

The detainee suffered various serious health issues but was not provided with the needed treatment and follow-up, the Palestinian Prisoners Media Center said.

Riyad al-Ashqar, the media spokesperson of the Prisoners Media Center, said the detainee, Yasser Thiab Hamdouni, 40, has been suffering from respiratory issues and heart disease, in addition to other complications, including problems in his left ear after Israeli soldiers assaulted him in prison in 2003.

Al-Ashqar added that Hamdouni did not receive urgently needed specialized medical care, and was moved several times from his cell to the Ramla prison clinic, which lacks basic equipment and specialized physicians.

Several months ago, Hamdouni underwent a heart catheterization procedure due to a number of complications, before he was confined to solitary in a cell in Nafha Israeli prison, causing further health complications. While in the solitary cell, he did not receive any medical follow-up or treatment.

Al-Ashqar stated that Hamdouni was kidnapped by the Israeli army on June 19, 2003, and was sentenced to a life term for participating in armed attacks that led to the death of an Israeli soldier, when he was a member of the now disbanded Al-Aqsa Brigades, the armed wing of Fateh movement.

Hamdouni is a married father of two children, from Ya’bad town, in the northern West Bank district of Jenin, and has been imprisoned for fourteen years.

The death of Hamdouni brings the number of Palestinians who died or were killed by the soldiers in prison since 1967 to 208, including 55 who died from the lack of adequate and specialized medical treatment, while eight other died shortly after their release.

The Israeli army pushed more units into the prisons and completely sealed and isolated their various sections in an attempt to prevent the detainees from organizing their protests.

The head of the Palestinian Detainees Committee Issa Qaraqe’ held the Israeli government and especially the Prison Authority fully responsible for Hamdouni’s death, and demanded a credible international investigation into the events that led to his death.

Qaraqe’ added that Israel continues its crimes and violations against the Palestinian people, and especially the detainees, who are subjected to escalating violations.