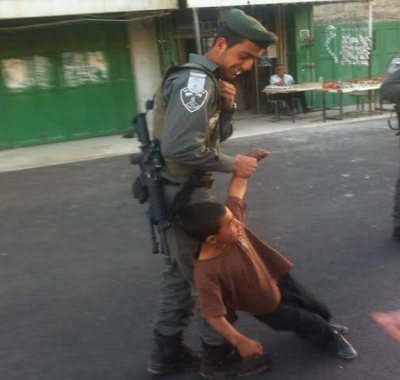 The Palestinian Detainees Committee reported Saturday that Israeli soldiers have kidnapped at least 1000 children, between the ages of 11 and 18, since the beginning of this year. Testimonies from six detained children are included in this report.

In a press release, the committee said that the numbers showed an %80 increase when compared to the number of child abducted in the same period of 2015.

It stated that some of the kidnapped children have been imprisoned under arbitrary Administrative Detention orders, without charges or trial, while many others were sent to court, faced high fines and even were sentenced to actual prison terms.
Hiba Masalha, a lawyer with the Detainees Committee, listened to various testimonies by imprisoned children, who told her about the difficult conditions they faced, the interrogations without lawyers or even the presence of any of their parents, in addition to being beaten and assaulted during their abduction and/or interrogation.

She added that the number of children who were kidnapped, interrogated and then held under house arrest since the beginning of this year has reached 70 – dor these children, their homes have become their prisons, and they have been deprived even of the right to go to school.

The lawyer collected the following testimonies from six detained children:

Qussai Ahmad Dari, 16, from the al-‘Isawiyya town in occupied Jerusalem, was kidnapped on July 13, 2016, after the soldiers invaded his family’s home at 4 am,  and violently pulled him out of his bed while screaming and shouting at him.

He said that a large number of soldiers invaded the property and violently searched it, before handcuffing and blindfolding him, and forcing him out of his home.

The soldiers forced him into a military vehicle, and forced his head onto the ground of the jeep before punching him several times. He was later moved to the al-Maskobiyya detention and interrogation center in Jerusalem, where he was forced on his knees with his head down and hands tied behind his back for three hours, before he was interrogated in another room for more than one hour, without any legal representation or the presence of either of his parents.

The child remained cuffed during interrogation, hands still behind his back, then was later moved to the children’s section of Majeddo prison.

Nidal Ghannam, 17, also from al-‘Isawiyya, was imprisoned on June 29, 2016, and is currently held in  Majeddo prison. He was summoned for interrogation, and when he went to al-Maskobiyya, he was interrogated for four consecutive hours without any legal representation, and then was moved to court before being sent back to al-Maskobiyya for twenty days.

During his interrogation, the child remained cuffed and tied to a chair, and was later sent to the Children’s section in Majeddo adult prison.

He stated that the soldiers frequently beat him up, repeatedly insulted and humiliated him, in addition to threatening to inflict further harm on him and his family.

The child said that at one time, around ten soldiers were interrogating him, beating and kicking him all over his body, before they dragged him to another room and started beating him again, especially on his head and limbs.

He added that one of the soldiers then dumped a trash can over his head, before continuing with his torture and humiliation for nearly one hour.

Detainee Ahmad Obeid, 16, from al-‘Isawiyya, was kidnapped on April 19, 2016, and was sentenced to five months and 3600 Shekels fine, and is still held in Majeddo prison. He was taken from his home at 3 am, and was taken to the al-Maskobiyya interrogation center.

He said that the soldiers invaded his bedroom, and that he woke up to the loud sounds of the soldiers, who then assaulted him, handcuffed and blindfolded him, and took him to their jeep where he was forced onto the floor.

After the child was moved to al-Maskobiyya, the soldiers ordered him on his knees for three hours while keeping his head down, facing the wall for three hours.

Ahmad was then moved to an interrogation room where an officer used a knife to cut off the plastic cuffs, and injured the child, causing him to bleed.

The child was interrogated by five officers who kept screaming and shouting at him, in addition to intimidating him for nearly three hours, before he ‘confessed’ to whatever they told him to say.

Ahmad remained in al-Maskobiyya for 13 hours, and was interrogated four times while handcuffed and tied to a chair, in addition to being beaten up by a number of soldiers, who also struck him on his head. He was then moved to the children’s section of Majeddo prison.

Detainee Omar Mer’ey, 17, from Zeita town, near Tulkarem in the northern part of the West Bank, was kidnapped on May 29, 2016, in the evening hours when a military jeep suddenly stopped next to him, and the soldiers assaulted him before violently twisting his arm being his back, and then beat him and pushed him.

The soldiers frequently punched him on his back, while one of them hit him with his rifle, before forcing him into their jeep. They took him to an area close to the Annexation Wall section in Zeita where he was let out of the jeep, and the soldiers ordered him to carry his ID card while they took pictures of him while laughing and mocking him.

The soldiers then cuffed him again, but this time with steel chains, and blindfolded him before taking him to a nearby military base where he was placed in a container for two hours.

The child said that the soldiers also took him in their jeep, and drove around all night long, depriving him from sleeping, and in the morning he was sent to an interrogation center in Ariel illegal colony.

After being interrogated for two hours, the child was moved to Huwwara prison, and in the evening of the same day, the soldiers moved him to the Children’s branch in Majeddo.

Detainee Mohammad Mashahda, 17, from Jabal al-Mokabber in Jerusalem, was kidnapped on May 20, 2016, at approximately three in the evening, when a number of undercover soldiers invaded his home.

Mashahda was in the shower when the soldiers forced their way into the bathroom. They shouted at him to get dressed; they accompanied him to his room, and abducted him after he put his clothes on.

The soldiers also searched his room, and confiscated his computer and mobile phone, before handcuffing and blindfolding him, and taking him for interrogation to al-Maskobiyya interrogation center.

During interrogation, the child was also repeatedly slapped and hit on his face and head, while an interrogator kicked him numerous times while he was handcuffed to his seat, causing him to fall over a number of times. Masalha was later from to the children’s branch of Majeddo Israeli prison.

Detainee Daoud Khatib, 17, from Aida refugee camp in Bethlehem, was kidnapped from his home at dawn on June 10, 2016, after many soldiers invaded the property and violently searched it, before handcuffing and blindfolding him, and taking him to a nearby military camp where he remained blindfolded and sitting on the ground until morning.

The soldiers examined the child’s ID card, and because it was issued in Jerusalem, he was moved to a police station in Nabi Yacoub, where he was searched again, fingerprinted, and was interrogated for three hours while handcuffed and shackled to a chair.

One of the interrogators repeatedly slapped the child on his face and head, while others also beat him when he denied the charges they made against him; eventually, he signed a confession he couldn’t even read.

The child remained held in al-Maskobiyya for twenty days, and was eventually moved to the children’s section in Majeddo prison.