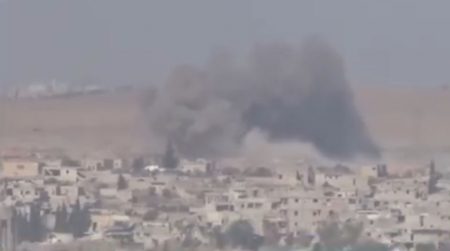 Jabhat Fatah al-Sham, formerly known as Jabhat al-Nusrah, conceded that the Syrian Arab Army and fighters from the Palestinian Liwa al-Quds had succeeded to seize the camp. The insurgents reported that the Syrian – Palestinian ground troops were supported by Syrian as well as Russian air cover.

Bomb squads and engineers are currently in the process of clearing Handarat for boobie traps, mine, improvised explosive devices and other hazards left behind by the insurgents or caused by the fighting; Among others, unexploded ordinance.

In the beginning of August 2016 insurgents, primarily backed by Turkey, Qatar and the USA, took control of the entire Handarat camp after heavy and protracted battles with the Syrian Arab Amy and Palestinian fighters.

The camp has a strategic importance, as it overlooks several rebel-held areas in eastern Aleppo, which has become under tight government siege after the Syrian army captured Castello.

The Syrian Defense Ministry announced, Thursday, the commencement of a new offensive against rebel-held areas in eastern Aleppo, urging the civilians to leave immediately and the rebels to lay down their weapons. On Friday, Syrian warplanes dropped leaflets over eastern Aleppo, renewing calls on civilians to stay away from the rebel positions and advising the rebels to surrender.

The renewed escalation in Aleppo came just days after a Russian-U.S. brokered truce expired last Monday with no extension, due to the rising tension between Russia and the United States.

The Syrian army stated  that the rebels violated the week-long truce over 300 times, adding that the U.S.-led coalition struck positions of the Syrian army during the truce in Deir Ez-Zour, killing 90 soldiers, which was deemed by Russia as the biggest violation to the truce.

The U.S.-led attack on Syrian army positions in Deir al-Zour (Deir Ez-Zor)was the first since the coalition started operations in Syria two years ago. Washington said the attack was “unintentional,” a claim totally rejected by the Syrian government, with President Bashar al-Assad saying the U.S.-led coalition intentionally struck the Syrian army posts in Deir Ez-Zor.