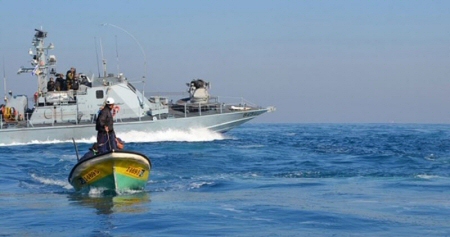 Israeli military forces, on Saturday, opened fire at Palestinian farmers and shepherds along the borderline area to the east of Gaza, as well as at Palestinian fishing boats, as they were sailing in Gaza waters, said WAFA sources.

Israeli forces stationed at military watchtowers, along the borders with Israel, opened heavy machine gunfire at farmers and shepherds while they were tending to their borderline agricultural land to the east of Gaza city, forcing them to leave the area.

Meanwhile, Israeli naval boats opened fire at Palestinian fishing boats despite their sailing within the designated fishing zone, off the shore of Rafah city and al-Sudaniyeh area, causing damages to at least one boat. No one was reported injured.

Israeli army and navy crews routinely open fire at Palestinian fishermen and farmlands along the Gaza border, in a blatant violation of a ceasefire deal reached between Israeli and Palestinian factions in Gaza, on August 26, 2014, following 51 days of bloody aggression on the Strip.