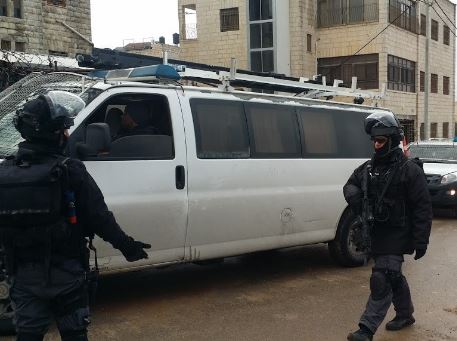 The Jerusalem office of the Palestinian Prisoners’ Society (PPS) has reported that Israeli soldiers have kidnapped twelve Palestinians during extensive military invasions and searches of homes, in different parts of the occupied district.

The soldiers also invaded the towns of al-‘Eesawiyya and Jabal al-Mokabber, and clashed with dozens of local youths who hurled stones and empty bottles at the military vehicles.

On Saturday evening, the army summoned six Palestinians for interrogation at the al-Maskobiyya interrogation center, west of Jerusalem, and abducted them, just as they arrived there.

On Sunday at dawn, the soldiers invaded several homes in the southern West Bank district of Hebron, and kidnapped two Palestinians, including a former political prisoner.

On Friday evening, the soldiers kidnapped a former political prisoner, identified as Sufian Fakhri Abda, and moved him to an interrogation facility. Abda was imprisoned by Israel for fourteen years, and was released just a few days prior to his abduction.