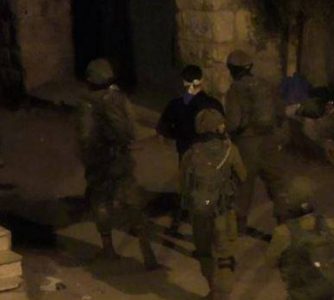 Israeli soldiers invaded, on Friday at dawn, the al-‘Arroub refugee camp, north of Hebron, in the southern part of the occupied West Bank, and kidnapped two Palestinians.

The Hebron office of the Palestinian Prisoners Society (PPS) has reported that the soldiers surrounded the refugee camp before invading it, and initiated violent searches oh homes.

It added that the soldiers interrogated many Palestinians, while searching their homes, and kidnapped two young men, identified as Khalil Ezzat Banat, 19, and Salah Anan al-Kindawi.

Also at dawn Friday, the soldiers invaded the Deheishe refugee camp, south of Bethlehem, shot two young men, and kidnapped a mother and her daughter.

In addition, a number of Israeli navy ships attacked, on Friday at dawn, Palestinian fishing boats in Deir al-Balah sea, in central Gaza, and the Sudaniyya area, in the northern part of the coastal region.