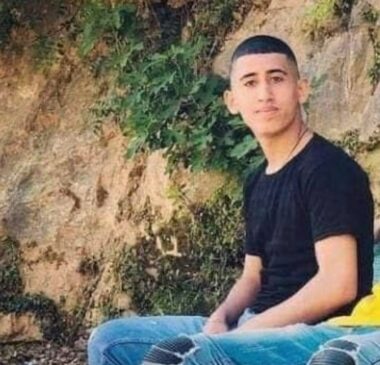 Israeli soldiers killed, Wednesday evening, a child and injured many Palestinians, in Husan village, west of Bethlehem, in the occupied West Bank.

Update: The army transferred the corpse of the slain child to his family at dawn Thursday.

The soldiers transported the corpse to the Nashash military roadblock, south of Bethlehem, and handed it to medics of the Palestinian Red Crescent Society (PRCS) who took it to Beit Jala governmental hospital.

Media sources said many army jeeps invaded the al-Matina area near the main road of Husan, leading to protests.

The soldiers fired many live rounds, rubber-coated steel bullets, and gas bombs at the protesters and many surrounding homes, causing many injuries.

The Palestinian Health Ministry has confirmed that the soldiers shot a child, Qussai Fuad Hamamra, 14 years of age, with a live round in the head and left him bleeding without first aid, especially after the army prevented the Palestinian medics from reaching him.

It added that the soldiers took the corpse of the slain child and refused to allow its transfer to the Palestinian side.

The Palestinians and the medics tried to retrieve the corpse of the slain child, but the soldiers prevented them and started pushing them away.

The child was walking home after performing evening prayers at the local mosque; the soldiers also surrounded the mosque after killing the child and refused to allow the Palestinians to leave.

The army made several allegations, including claiming that the child was throwing stones at the soldiers or that he was throwing a Molotov cocktail. However, eyewitnesses said Qussai was not participating in any protests but was walking back home from the local mosque.

Protests were still ongoing at the time of this report, and the soldiers continued to fire dozens of live rounds and rubber-coated steel bullets, gas bombs, and concussion grenades.

Medical sources have confirmed at least six injuries, including some with live fire and rubber-coated steel bullets and many who suffered the effects of tear gas inhalation.

Dozens of Palestinians suffered the effects of tear gas inhalation, especially after the soldiers fired gas bombs at mosques to force the locals to leave.

The child was killed not far from where the Israeli soldiers killed Ghada Ibrahim Ali Sabateen, 48, on April 10, 2022.

On Wednesday morning, the soldiers killed a Palestinian lawyer, Mohammad Hasan Assaf, 34, after firing many live rounds at his car in the Industrial Area in Nablus city, in the northern part of the occupied West Bank.