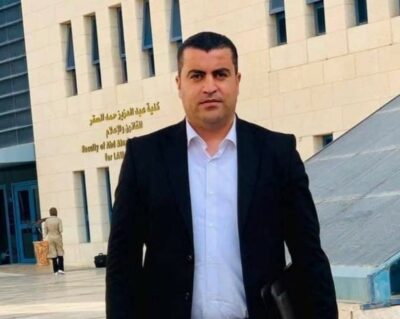 Israeli soldiers killed, Wednesday morning, a Palestinian lawyer after firing many live rounds at his car in the Industrial Area in Nablus city, in the northern part of the occupied West Bank.

The slain Palestinian, Mohammad Hasan Assaf, 34, was from Kafr Laqif village in Qalqilia, in the northern part of the West Bank. The soldiers shot him with a live round in the chest.

Mohammad, a father of three children, the oldest of them is only four years of age, was killed by the soldiers while returning home after driving his sons and nephews to school; he was returning from the Industrial Area in Nablus when the soldiers fired at his car and killed him.

Mohammad was killed when the Israeli soldiers were withdrawing from Nablus after a massive invasion into several areas, causing dozens of injuries; many were shot with live fire. Eyewitnesses said the army fired dozens of live rounds at cars, homes, and streets while withdrawing from the area.

The soldiers stormed and ransacked dozens of homes in Beita town, the eastern area of Nablus city, and many villages and towns overnight.

Mohammad was a lawyer with the Wall & Colonization Resistance Commission and was a well-known figure and social activist who represented dozens of families in Israeli courts, filed appeals against the illegal Israeli annexation of Palestinian lands, and defended the rights of the Palestinians, especially the farmers and villagers.

Mohammad was also a known figure, not just to the Palestinians for defending their rights and lands from illegal Israeli annexation and colonies, but also by the Israeli occupation soldiers for his constant participation in the ongoing nonviolent processions against the illegal Israeli Annexation Wall, and the colonies. He was also known in Israeli courts for representing the families and filing appeals to void illegal annexation orders of the Palestinian lands.
His corpse was moved from Rafidia hospital in Nablus to his home in Kafr Laqif town in Qalqilia.

Thousands of Palestinians participated in Mohammad’s funeral ceremony and burial while chanting against the escalating Israeli crimes and violations and calling for resisting the occupation until liberation and independence.