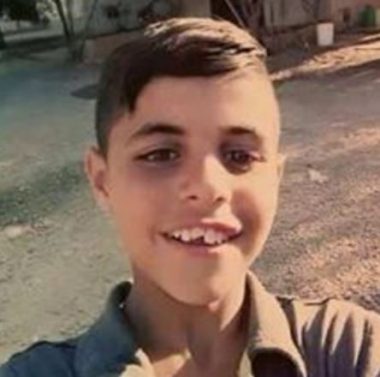 The Palestinian Health Ministry has reported that one child was killed, Tuesday, after an Israeli soldier shot him from a close range in the town of al-Ram, north of occupied Jerusalem.

The Ministry added that the child, Mohammad Sidqy at-Tibakhi, only 12 years of age, was shot in the chest, and died of his serious wounds at the Palestine Medical Complex, in Ramallah.

Eyewitnesses said an Israeli army sharpshooter shot the child from a close range, after the soldiers invaded the town, and clashed with many local youngsters, who hurled stones at the military vehicles.

The killing of the Palestinian child led to extended clashes between the soldiers and local youths, especially close to the military base, built on Palestinian lands near the town. The soldiers fired dozens of gas bombs and rubber-coated steel bullets, causing several injuries. 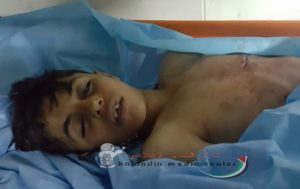 The Health Ministry said the death of the child brings the number of Palestinians killed by Israeli fire since the October 1st 2015 to 229, including 53 children. Among are 52 from Jerusalem, and 67 from the southern West Bank district of Hebron.

Israel is still holding captive the bodies of 14 Palestinians, who were killed by its military; half of them are from Jerusalem, and the rest are the different parts of the West Bank.

The soldiers shot Mustafa with two bullets in the stomach for reportedly stabbing and lightly wounding two soldiers at the entrance of Al-Arroub refugee camp, to the south of Bethlehem.