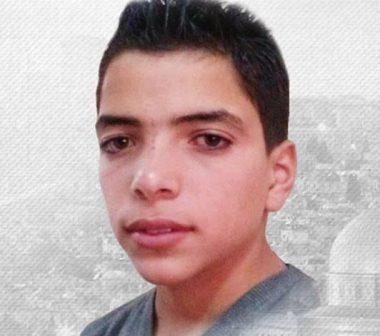 Palestinian medical sources said the soldiers shot Mos’ab Firas Tamimi, 17, with a live round in his neck, causing very serious wounds, before he was moved to the Istishari Hospital, in Ramallah, where he succumbed to his injuries.

The Palestinian was shot after the soldiers invaded Deir Nitham, and fired many live rounds, rubber-coated steel bullets and gas bombs, at Palestinian protesters who were marching in the village.

The Israeli army claimed that the Palestinian was shot after the soldiers “noticed he was holding a gun,’ a claim that was never verified.

The army said that the soldiers instantly used live fire against the Palestinians, when they saw the alleged gun. Mos’ab’s father said that the soldiers detained a teen who suffers from a mental disability, and that he and other Palestinians went to the soldiers to secure the teen’s release.

He added that he was near the teen when the soldiers shot his boy in the neck, from a short distance of 5 – 6 meters, and killed him.

“There were clashes between the youngster and the soldiers, before the army detained a mentally ill boy, I told the officer that the boy  crazy, but he said – we arrested him, and we want to kill another one,” the father stated, “I turned by car around and returned because wanted to remove the youths when I saw the soldiers’ evil intentions, but when I was 5 to 6 meters away from my boy, the soldiers shot him in his neck, and killed him – he was nearly one meter away from the soldier who killed him.”

After killing the teen, the soldiers imposed a strict siege on Deir Nitham, prevented the Palestinians from entering or leaving it, and cut the power supply to the village.

Eyewitnesses said dozens of soldiers are surrounding the village, apparently preparing for a massive invasion.