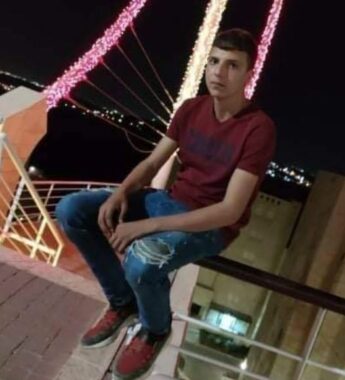 The Israeli army killed, on Sunday at dawn, a Palestinian teen who was repeatedly struck and assaulted by the soldiers, after they chased his car and opened fire at it, on the main Ramallah-Nablus road, in the occupied West Bank.

Palestinian sources said the teen has been identified as Amer Abdul-Rahim Snobar, 17, from Yitma village, south of the northern West Bank city of Nablus. They added that the soldiers fired several live rounds at the car, and then repeatedly assaulted Snobar, including hitting him with rifle-butts, inflicting serious wounds, but did not attempt to abduct him or move him to an Israeli medical center.

Palestinian medics were called to the scene and provided the seriously wounded young man with vital first aid before rushing him to Palestine Medical Complex in Ramallah.

Initial reports indicated that the young man was shot in his car, but eyewitnesses confirmed he was not injured by the bullets, but instead, all his wounds were inflicted by the soldiers who constantly assaulted him.

Dr. Ahmad al-Bitwati, the head of Ramallah Medical Complex in Ramallah, told Palestine TV that Snobar was not shot, but was constantly struck by the soldiers on the back neck, and his head, and confirmed that he died because of these serious wounds.

On Saturday evening, the soldiers closed Beit Iksa and Qalandia roadblocks, north of Jerusalem, and prevented the Palestinians from crossing in both directions.

The soldiers searched dozens of cars and interrogated many Palestinians while inspecting their ID cards, before the army invaded the al-Ram town, north of Jerusalem, and chased many young men.

Israeli sources quoted the army claiming that pipe bombs were hurled at the Qalandia terminal, causing no injuries or damage and that an army sapper was called to the scene.