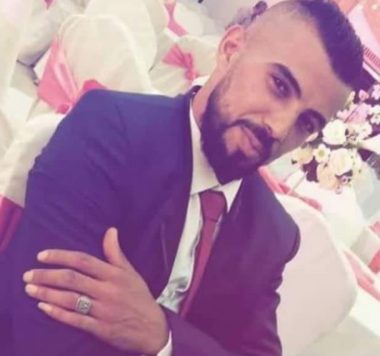 The Palestinian Health Ministry has confirmed, Friday, that Israel soldiers resorted to the excessive use of force against the nonviolent “Great Return Match” in Gaza, on its nineteenth consecutive week, killing a young man, and wounding 220 Palestinians, including 90 who were shot with live fire.

It is worth mentioning that, in a previous protest, the soldiers shot Yaghi with live fire, wounding him in his leg.

Dr. al-Qedra confirmed that the soldiers injured 220 Palestinians, including 90 who were shot with live fire, in the Gaza Strip.

He added that the soldiers, stationed in their fortified sniper posts hundreds of meters away from the perimeter fence, also shot six other Palestinians with live fire, in the same area, and caused many to suffer the effects of teargas inhalation.

The soldiers also shot four Palestinians with live fire, east o Khuza’a town, east of the southern Gaza Strip city of Khan Younis, before they were rushed to the European Hospital, while many others suffered the effects of teargas inhalation.

Another Palestinian suffered a moderate injury after the soldiers shot him with live fire in his leg, and caused many to suffer the effects of teargas inhalation, in Beit Lahia, in northern Gaza. 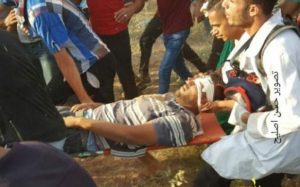 Furthermore, one Palestinian was shot with a live round in his pelvis, east of Rafah, in southern Gaza, before he was moved to Abu Yousef Najjar hospital, suffering a moderate injury.

The army attacked the Palestinian protesters in several parts of the coastal region, especially east of the al-Boreij refugee camp, in central Gaza, in addition to Rafah, Khan Younis, Beit Lahia and Beit Hanoun areas, in the southern and northern parts of the Gaza Strip.

Dozens of protesters launched balloons carrying the colors of the Palestinian flag, in addition to flying burning kites, causing fire in lands in Israeli settlements hundreds of meters away from the fence.

On Friday evening, the soldiers fired a shell at a site, east of Rafah, causing fire and property damage.