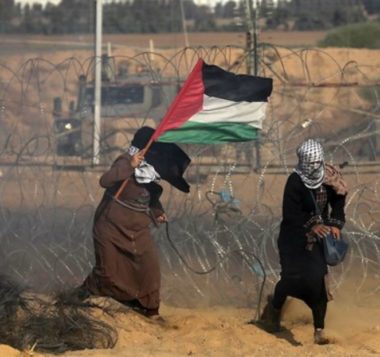 The Palestinian Health Ministry has reported, Friday, that Israeli soldiers killed seven Palestinians, including two children, and injured 506 others, including 90 with live fire; three of them suffered serious wounds, during the Great Return March processions, in the Gaza Strip.

Dr. Ashraf al-Qedra, the spokesperson of the Health Ministry in Gaza, said, “the types of injuries, and the deliberate use of sniper fire against the protesters, reflect one of the bloodiest and most brutal military assaults against the processions in the Gaza Strip, since the massacre of May 14.”

The army killed sixty Palestinians on May 14th, 2018, including six children and four officers of the Ministry of Interior and National Security, in the Gaza Strip, and injured more than 2700. |

Dr. al-Qedra stated that 506 Palestinians suffered various types of injuries, 210 of them were moved to hospitals, and added that 90 of the injured were shot with live fire, including three who suffered life-threatening wounds.

He also said that among the wounded are 35 children, four women, four medics (including one with live fire,) and two journalists.

The soldiers killed Mohammad Ali Mohammad Anshassi, 18, and Nasser Azmi Misbih, 12, east of Khan Younis, in the southern part of the Gaza Strip.

Furthermore, an army sharpshooter killed a child, identified as Mohammad Nayef al-Houm, 14, with a live round in the chest, east of the al-Boreij refugee camp, in central Gaza, before his corpse was moved to Al-Aqsa Hospital, in Deir al-Balah.

Thousands of Palestinians participated in the Great Return March procession, along the perimeter fence, across the eastern parts besieged Gaza Strip, for the 24th consecutive Friday, while many burnt tires, and a few managed to cross the fence.

The protesters also managed to down an Israeli drone flying over the Great Return Camp, east of Rafah, in southern Gaza.

The Israeli army said that some protesters flew flammable balloons, across the perimeter fence.