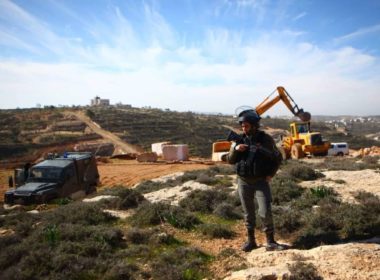 Israeli soldiers invaded, Monday, Palestinian farmlands in a few small villages, west of Yatta town, south of the southern West Bank city of Hebron, and prevented the Palestinians from preparing for an agricultural road leading to them.

Rateb Jabour, the coordinator of the National and Popular Committees against the Annexation Wall and Colonies in southern West Bank, said the soldiers prevented the Palestinians in the al-‘Amad area, west of Yatta, from preparing for the new road.

Jabour added that the Palestinians were stopped once before by the army, and insist on preparing for this road to have easy access to their lands.

The army has been preventing the Palestinians from entering their lands, in addition to denying others the right to rehabilitate them, due to their proximity to the illegal Etna’el colony, which was built in private Palestinian lands, in direct violation of International Law and the Fourth Geneva Convention.