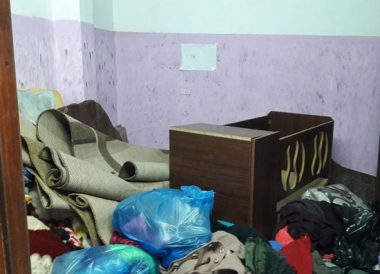 Israeli soldiers invaded, on Friday at dawn, Qabatia town, south of the northern West Bank city of Jenin, before breaking into and ransacking the family homes of two detainees, causing excessive damage, leading to clashes between the soldiers and local youngsters, causing dozens of Palestinians to suffer the effects of teargas inhalation.

The sources added that the soldiers interrogated the two families, and threatened to keep invading their homes and imposing punitive measures against them.

It is worth mentioning that the two Palestinians were abducted by undercover Israeli soldiers, on Thursday evening, near Jenin.

The two abducted residents work in Kafr Qasim Palestinian town, east of Tel Aviv; Israeli security sources said an Israeli man, identified as Reuven Schmerling, 69 was killed in the town, on Wednesday, in an area where the two detained Palestinians worked.

It is worth mentioning that the Israeli Shin Bet security agency and the police, are investigating the incident amid a court-imposed gag order.

The mayor of Kafr Qassim said the city is inflamed in a gang war while the police are not doing enough to intervene.

Following the invasion into Qabatia, many youngsters hurled stones at the military jeeps, while the soldiers fired live round, gas bombs and concussion grenades, at the protesters and many surrounding homes.

The Palestinian Civil Defense in Jenin said dozens of residents received treatment for the severe effects of teargas inhalation.

Similar clashes took place near the Shuahada village junction, which leads to Jenin city in addition to the towns of Qabatia and Burqin.

Many Palestinians were injured, and some were rushed to the Jenin governmental hospital for further treatment.

Israeli military drones have been frequently seen hovering over Jenin and Qabatia, over the past two days, amidst extensive army deployment.