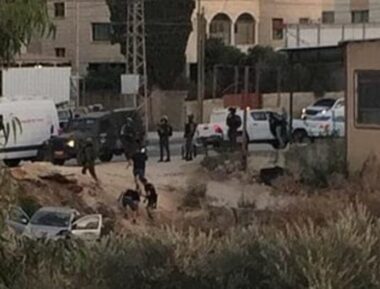 On Thursday evening, Israeli soldiers shot and seriously injured a young Palestinian man and abducted him near Nablus, in the northern West Bank, after the army claimed he carried out a ramming attack; Palestinian witnesses said the incident was a traffic accident.

The witnesses said the entire incident was just a traffic accident between a Palestinian and an Israeli military vehicle, and that the soldiers chose to open fire because he was a Palestinian and added that one soldier was slightly injured.

After shooting the young man, the soldiers repeatedly assaulted him despite his wounds and abducted him before taking him to an unknown destination.

Following the incident, dozens of colonizers invaded Huwwara and attacked Palestinians, their shops, and their cars, in addition to isolating the town.

Huwwara has lately been subjected to seriously escalating assaults, invasions, and violations by the colonizers, who also hurl stones and cause damage to Palestinian cars and buildings, and remove the Palestinian flags, while the soldiers attack the Palestinians with live fire, rubber-coated steel bullets, gas bombs, and concussion grenades.