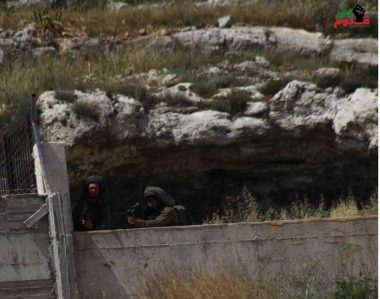 Israel soldiers shot and seriously injured a Palestinian man, Saturday, after the army attacked the weekly procession in Kufur Qaddoum village, east of Qalqilia, in the northern part of the occupied West Bank.

Medical sources said the man, Waleed Barham, 55, was shot with a rubber-coated steel bullet in the head, while in his land.

They added that the bullet fractured his skull, causing a serious injury, especially since the soldiers shot him from a close range.

The man was rushed to a hospital in Nablus, also in northern West Bank, and was instantly admitted to surgery.

The Popular Committee in Kufur Qaddoum said the soldiers invaded the village and resorted to the excessive use of force against local protesters, before chasing them in the olive orchards.

On Friday, the soldiers attacked the protesters in Kufur Qaddoum, and fired live rounds, rubber-coated steel bullets and gas bombs. Some of the live round struck a Palestinian car causing damage.

In related news, dozens of soldiers invaded, on Saturday at night, Joyyous town, east of Qalqilia.