Israeli Soldiers Shoot A Man And Abduct His Son, In Hebron 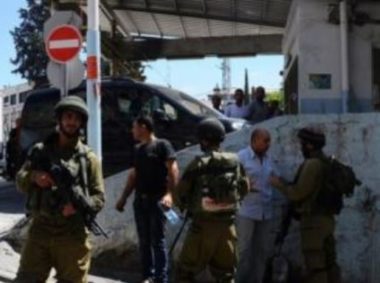 Israeli soldiers shot, on Monday at dawn, a Palestinian man in his own home, and abducted his son, in Halhoul town, north of Hebron, in the southern part of the occupied West Bank. The army also abducted four other Palestinians in Hebron and Ramallah.

Media sources in Hebron said the soldiers invaded the home of Khaled Shehda ad-Douda, 50, before searching and ransacking the property and abducted his son, Mohannad.

They added that the soldiers fired live rounds in the home, moderately wounding Khaled’s father in his left leg, before he was rushed to the Hebron governmental hospital.

The soldiers also installed roadblocks at Hebron’s northern entrances, in addition to Sa’ir and Halhoul town, before stopping and searching dozens of cars, and interrogated many Palestinians while inspecting their ID cards.