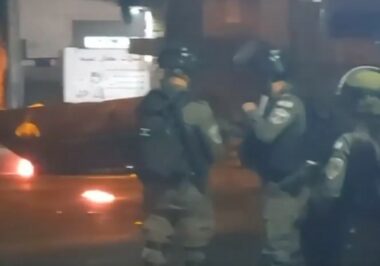 On Tuesday evening, Israeli soldiers shot a young Palestinian man and abducted three in the at-Tour town, east of occupied Jerusalem, in the West Bank.

The sources added that the soldiers shot a young man with a rubber-coated steel bullet in the abdomen and caused many to suffer the effects of tear gas inhalation.

The soldiers also used trucks to spray many homes with wastewater mixed with chemicals and fired gas bombs and concussion grenades at them.

In addition, the soldiers abducted three young men, Ayham Mfarreh, Odai Abu Jom’a, and Yazan Abu Jom’a, after stopping them near the Al-Makassed Hospital in the town.