Israeli Soldiers Injure A Palestinian Child In The Eye In Hebron 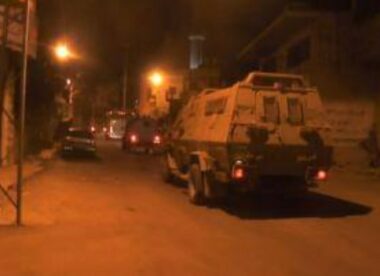 On Tuesday evening, Israeli soldiers shot three Palestinians, including a child who was injured in the eye and caused many to suffer the effects of tear gas inhalation during a procession against the escalating Israeli violations, including the killing of a child, in Hebron in the southern part of the occupied West Bank.

Media sources in Hebron said dozens of Palestinians marched in Beit Ummar town, north of the city, carrying Palestinian flags, chanting for liberation, and against the escalating Israeli crimes against the Palestinian people.

They added that the soldiers attacked the protesters with live rounds, rubber-coated steel bullets, gas bombs, and concussion grenades and chased many of them.

The Health Ministry in Hebron said the soldiers shot a child with a rubber-coated steel bullet in his left eye, causing damage to his retina and bleeding.

The Health Ministry added that the soldiers also shot three other Palestinians, including a child, with rubber-coated steel bullets and gas scores to suffer the effects of tear gas inhalation.

It is worth mentioning that the soldiers killed, Tuesday, Mo’men Yassin Jaber, 16, in the Shuhada Street area in the center of Hebron city.

The soldiers also shot a Palestinian with live fire in the main artery in his leg before he was rushed to surgery. The wounded Palestinian remains in serious condition at a hospital’s Intensive Care Unit in Hebron.

The army also invaded Kharsa village, west of Hebron, and the al-Arroub refugee camp, north of the city, leading to protests.

Medical sources said the soldiers caused many injuries, especially due to the severe effects of tear gas inhalation.

On Monday, the Palestinian Health Ministry in Gaza confirmed that a child, Hanin Abu Qayda, 10, died from serious wounds she suffered on August 6th, after the Israeli army bombarded the Um an-Nasr village in Beit Hanoun, in the northern part of the Gaza Strip.