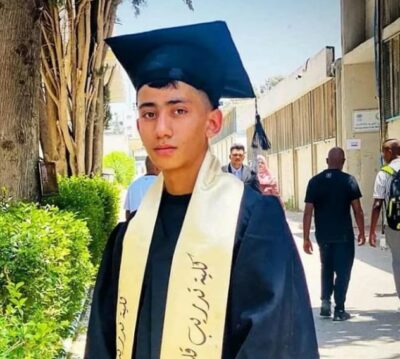 Medical sources have reported that Israeli soldiers killed, Tuesday, a Palestinian child and seriously injured another Palestinian, in Hebron city, in the southern part of the occupied West Bank.

The sources said the soldiers shot the child, Mo’men Yassin Jaber, 16, with an expanding bullet in the heart, instantly killing him and causing serious damage to his organs.

The child was shot during protests that took place in the Shuhada Street area, in the center of Hebron city.

The soldiers also shot a Palestinian with live fire in the main artery in his leg before he was rushed to surgery. The wounded Palestinian remains in serious condition at the Intensive Care Unit of a hospital in Hebron.

Hundreds of Palestinians marched in Mo’men’s funeral procession after wrapping his body with the Palestinian flags and headed towards the Shuhada Graveyard in the Sheikh neighborhood in Hebron.

In related news, the soldiers invaded the Al-Khader town, south of Bethlehem, and abducted Mohammad Ismael Mousa, 24, and Akram Mousa, 27, after stopping their car and confiscating it in the Old City.

On Monday, the Palestinian Health Ministry in Gaza confirmed that a child, Hanin Abu Qayda, 10, died from serious wounds she suffered on August 6th, after the Israeli army bombarded the Um an-Nasr village in Beit Hanoun, in the northern part of the Gaza Strip.