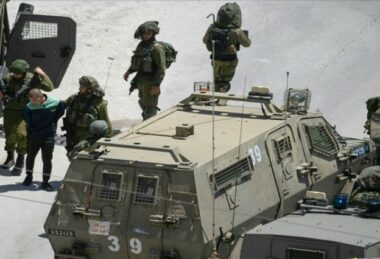 On Saturday night, several Israeli army jeeps invaded Beit Ummar town, north of the southern West Bank city of Hebron, leading to protests before the soldiers shot a young man and caused many to suffer the effects of tear gas inhalation.

Awad added that the soldiers shot a young man, 20, with a live round in the leg and caused dozens, including many in their homes, to suffer the effects of tear gas inhalation.

The Palestinian was planting olive trees in his orchard in the Wad Abbas area, in the eastern part of the village.