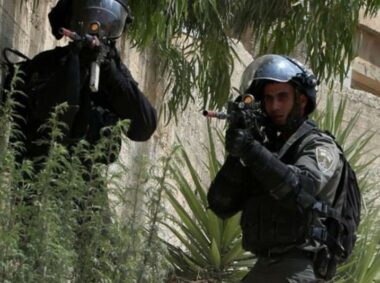 On Monday, Israeli soldiers injured a young Palestinian man near the Annexation Wall, south of Jenin, in the northern part of the occupied West Bank.

Local sources said the soldiers fired live rounds at Palestinians on lands close to the illegal wall in Toura village, south of Jenin, wounding a young man in the leg.

Palestinian medics rushed the wounded young man to Ibn Sina hospital in Jerusalem, where his wounds were described as moderate but stable.

The soldiers also invaded Fahma village, southwest of Jenin, and installed a roadblock at its main entrance before stopping and searching dozens of cars.

Also, the soldiers invaded many areas near the towns of Arraba, Marka, Zawiya, and Kafirt, near Jenin.