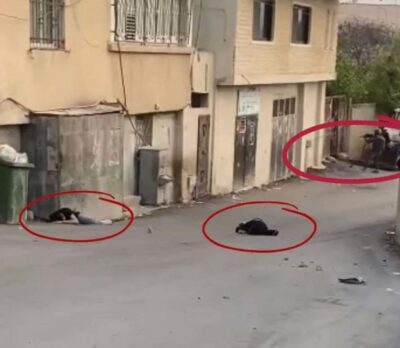 The invasion of the town was conducted from several directions after the soldiers surrounded and isolated it.

The soldiers then carried out massive and violent searches of homes and buildings in the town, causing damage.

The Palestinian Red Crescent Society (PRCS) said the soldiers shot a young man, Lutfi Ibrahim Lutfi, with a live round in the head, and another Palestinian, Abdullah Emad Samoudi, in the back, causing life-threatening injuries. It added that its medics rushed to help the two young men, but the soldiers stopped them and claimed that they provided the needed treatment to the two, who “suffered mild injuries”.

However, the medics managed to reach the two young men and realized that they were severely injured and were excessively bleeding.

The PRCS said the heart of one of the wounded men stopped and had to be revived by the medics before they rushed the two to Ibn Sina hospital in Jenin, before being rushed to surgery.

The soldiers also abducted a young man, Yousef Abul-Wahab Freihat, and caused dozens of Palestinians, including several children, to suffer the effects of tear gas inhalation.

Two of the wounded children have been identified as Tayyem Mohammad Freihat and Yousef Sammoudi.

The Israeli army withdrew from the town after invading it for a few hours.