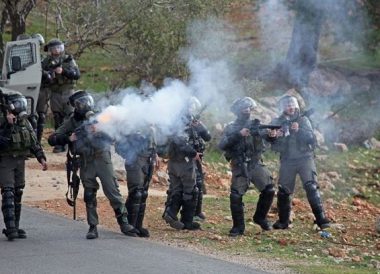 Media sources in Nablus said dozens of Palestinians took off to the street, protesting the military invasion into their community, before the soldiers attacked them with live fire, rubber-coated steel bullets and gas bombs.

They added that the soldiers shot a young man with a live round in the shoulder, before medics rushed him to a hospital. Several Palestinians suffered the effects of teargas inhalation.

It is worth mentioning that the invasion took place after dozens of illegal Israeli colonialist settlers, living in Bracha colony, invaded the village and attacked many homes, causing damage.