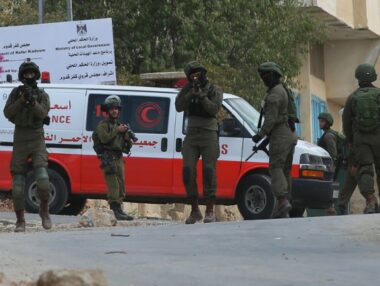 Media sources said many army jeeps invaded the town before the soldiers stormed and ransacked homes, leading to protests.

They added that the soldiers shot three young men with live fire, resulting in moderate wounds, and caused many to suffer the effects of tear gas inhalation.

The soldiers also abducted Maher Sa’id Zakarna, Jihad fares Zakarna, and Ala Faleh Abu ar-Rob, from their homes in the town.

The family of Maher Zakarna said the soldiers ransacked the property and assaulted one of their sons, Hamza, when they could not find their other son, Ahmad, and threatened to assassinate him if he didn’t turn himself in to the army.

During the invasion, Palestinian resistance fighters exchanged fire with Israeli soldiers in Qabatia and Jenin city.