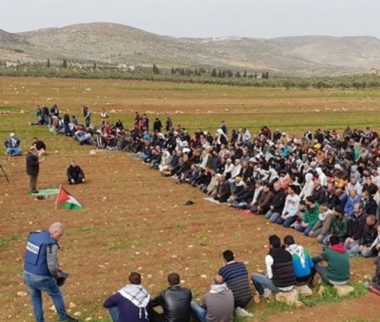 Israeli soldiers shot, Friday, seven Palestinians with live fire and rubber-coated steel bullets, and caused many to suffer the effects of teargas inhalation, after attacking a nonviolent procession in the al-Mughayyir village, northeast of Ramallah.

Hundreds of Palestinians held Friday prayers on their lands, which Israel intends to illegally confiscate for its colonies, before holding the procession while chanting against the occupation, and its escalating violations.

They also marched in commemoration of Hamdi Na’san, 38, a father of four young children from the village, who was killed, on January 26th, with a bullet to his back by a group of illegal Israeli colonialist settlers, who invaded the northern part of al-Mughayyir.

The soldiers resorted to the excessive use of force against the protesters, and fired many live rounds, rubber-coated steel bullets, sponge-tip bullets, and gas bombs, and chased them in the Palestinian farmlands.

Medical sources said seven Palestinians were shot with live fire and rubber-coated steel bullets, and many others suffered the effects of teargas inhalation.

Furthermore, the soldiers attacked dozens of Palestinian, Israeli and international peace activists, participating in the weekly nonviolent procession against the illegal Annexation Wall and colonies in Bil’in village, west of Ramallah, causing many to suffer the effects of teargas inhalation.

In related news, the soldiers injured dozens of nonviolent protesters during the weekly procession against the Annexation Wall and Colonies in Ni’lin village, west of Ramallah.