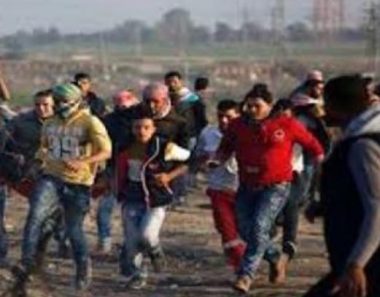 The Palestinian Health Ministry has reported, Saturday, that Israeli soldiers shot three young Palestinian men, including one who suffered a serious injury, in Malka area, east of Gaza city.

The Ministry said the three Palestinians were all shot with live fire and added that one of them is in a serious condition after being shot in the abdomen.

Media sources in Gaza said the soldiers sporadically opened fire on Palestinian protesters in the area, which is one of five main areas of protests near the border fence, across the Gaza Strip.

In related news, the Health Ministry issued a statement condemning the systematic Israeli policies in targeting journalists and medical teams and added that the army shot and moderately injured three medics and caused eight others to suffer the effects of teargas inhalation, since the protests started on March 30.

It added that the soldiers also caused damage to three Palestinian ambulances after targeting them with live fire and gas bombs.

Spokesperson of the Health Ministry in Gaza, Dr. Ashraf al-Qedra, called on the international community and all legal and human rights organizations to ensure protection to all medical teams, and journalists, as stated by the Fourth Geneva Convention and International Humanitarian Law.

He added that, on Friday, Israeli soldiers killed ten Palestinians, including a journalist, and injured 1354 others; 491 of them were shot with live rounds, including expanding bullets, and that 33 are still in critical conditions.