Not Only Against Demonstrators but also Journalists: Israeli forces Practice Murder in Cold Blood 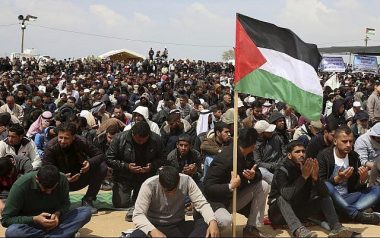 On Saturday, 07 April 2018, Israeli forces killed photojournalist Yasser Murtaja. Murtaja succumbed to wounds he sustained after being hit with a live bullet that was shot by an Israeli sniper to the abdomen. Since the beginning of the incidents, 9 journalists sustained live bullets wounds.

PCHR emphasizes that  the Israeli forces practice the policy of silencing the press according to PCHR’s follow-up for decades. PCHR also condemns targeting journalists and peaceful demonstrators and confirms its persistent efforts to prosecute  Israeli murders and war criminals.

According to PCHR’s investigations, despite apparently wearing “a Blue Helmet and Vest clearly Marked Press”, at approximately 13:45 on Friday afternoon, journalist Yasser Murtaja was wounded after being hit with a live bullet to the abdomen causing a rupture to the main artery of the Intestines while he was recording the events, 150-200 meters into the northeast of the demonstration yard in Khuza’ah, east of Khan Yunis.

Murtaja was transferred via an ambulance to Nasser Hospital in Khan Yunis. Doctors found out that Murtaja suffers from a sever bleeding in the abdomen in addition to a rupture in an artery. He underwent a surgery and received medical treatment until his death was announced at approximately 01:20 on Saturday dawn, 07 April 2018.

PCHR documented the injury of 9 journalists since the beginning  of the “Great March of Return demonstration” on 30 March 2018 as follows:

Targeting journalists, despite all the distinctive signs that emphasize the nature of their work and even the Israeli forces’ intentionally targeting the demonstrators in the upper side of their bodies undoubtedly confirms that the Israeli soldiers had orders or at least permits to cause  casualties inflicted and deter journalists from covering these crimes as well.

PCHR emphasizes that the rules of the international human rights law should be followed with peaceful assemblies on the Gaza Strip borders. Therefore, PCHR  stresses that Israel should be obliged to the international standards relevant to the use of force and firearms by Law Enforcement Officials.

Rules of firearm use stipulate that soldiers should not use live bullets unless their life is under imminent threat and the shooting must be gradual and proportionate with the threat.

First, the soldiers shall give a warning and not in any case use live bullets, except as a last option to defend themselves or in cases of non imminent danger aiming at hindering the attacker’s movement and not killing him.

According to PCHR’s follow-up and several international reports,  the facts on the grounds confirms that no threat was posed to the soldiers’ lives as they were standing hundreds of meters away from the demonstrators and separated by three security fences and fortifications with a huge sand barrier and personal shields. This confirms the absence of any possibility of a real threat to the soldier’s lives.

According to following up the targeting cases and injuries, one can confirm that the Israeli soldiers targeted the demonstrators with the aim of killing them. This can be clarified from the places of injuries; many of which were in the head and the upper parts of their bodies.

PCHR condemns in the strongest terms the targeting of peaceful demonstrators and journalists by the Israeli forces, who deliberately caused casualties inflicted.

PCHR calls upon the international community to take immediate action to stop the Israeli authorities’ crimes against the Palestinian people.

PCHR stresses the central role played by the European Union (EU)  in promoting the protection of human rights in the Middle East.

Thus,  PCHR calls upon the EU to activate the Euro-Israeli Association Agreement in order to ensure Israel’s respect for human rights in the oPt.

PCHR affirms that the providing  any military or political support by any international party in the meantime constitutes participation in the crime committed against Palestinian civilians.