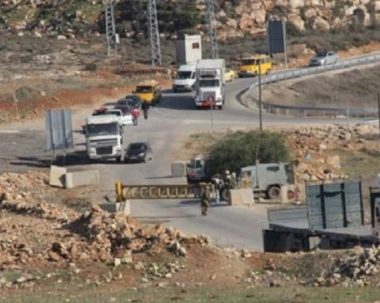 Mohammad Tamimi, a nonviolent activist against the Annexation Wall and Colonies, said the soldiers, stationed on a military tower at the main entrance of the town, shot the two Palestinians while entering the town.

Tamimi added that one Palestinian was shot with two live rounds in his legs, and the other was injured by shrapnel in the head and shoulders.

On June 6, 2018, the soldiers killed Ezzeddin Abdul-Hafith Tamimi, 21, in Nabi Saleh after shooting him with three live rounds from a very close range in an extrajudicial assassination.

The soldiers then prevented Palestinian medics from approaching Ezzeddin as he lay, critically injured, on the ground.

Nabi Saleh village witnesses weekly nonviolent procession against the Annexation Wall and colonies and is subject to constant invasions and military violations.