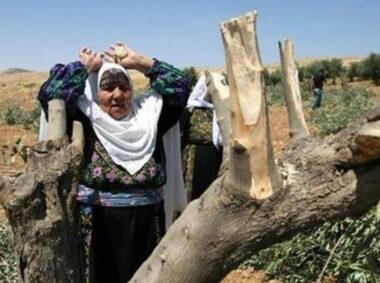 Israeli soldiers, accompanied by many colonizers, uprooted more than 130 trees and bulldozed farmlands, Friday, in Beit Ummar town, north of Hebron, in the southern part of the occupied West Bank.

He added that the bulldozed lands and trees are in an area of 5 Dunams, and are owned by the local families of Sa’id Ba’ran and Sabarna.

The bulldozing and uprooting of the lands aims at expanding the illegal colony at the expense of the privately-owned Palestinian lands.

In occupied Jerusalem, the soldiers summoned for interrogation Yasser Darwish, a member of the Regional Council of Fateh movement, in addition to a Fateh official, Mansour Mahmoud, from the al-‘Isawiya town in the city.

It is worth mentioning that, two days ago, the two Palestinians were summoned and interrogated at the al-Maskobiyya interrogation and detention facility, in Jerusalem.