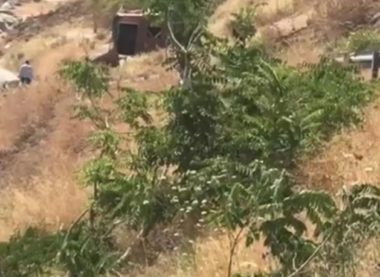 Israeli soldiers uprooted, Monday, dozens of Palestinian olive trees in the western area of the al-‘Isawiya town, south of the Al-Aqsa Mosque in occupied East Jerusalem, reportedly “obscuring the view of surveillance cameras in the area.”

Mohammad Abu al-Hummus, a member of the Follow-Up Committee in al-‘Isawiya said the soldiers invaded the town since morning hours, and were extensively deployed in various roads and neighborhoods.

He added that Israeli police officers also ticketed several Palestinian cars, and searched them, in addition to examining the ID cards of many Palestinians.

Abu al-Hummus also said the uprooting of the trees was made under false pretenses, especially since it came shortly after the army distributed demolition and eviction orders of Palestinian property, as part of the so-called “National Gardens.”