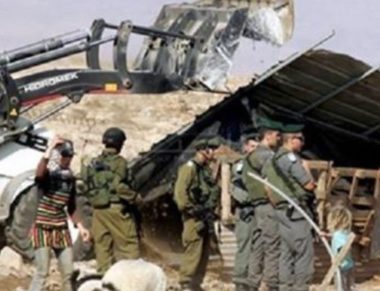 Israeli soldiers invaded, Sunday, a Palestinian land near the al-‘Arroub refugee camp, north of the southern West Bank city of Hebron, uprooted dozens of trees, and demolished a chicken coop.

Local nonviolent activist, Mohammad Awad, said the soldiers, and employees of the so-called “Civil Administration Office,” the executive branch of Israel’s illegal occupation of the West Bank, invaded Abu Souda area, on the Hebron-Jerusalem road, right near the refugee camp.

He added that the soldiers then uprooted dozens of trees, and demolished a 600 square/meters chicken coop, owned by a Palestinian, identified as Khaled Mohammad Samaheen.

It is worth mentioning that, nearly three years ago, the soldiers demolish a chicken coup owned by the Palestinian in the same area, under the pretext that he “had no documents pricing ownership of the land.”

The attacked land and coop are in front Beit al-Bakara, meaning “House of Blessing”, built 70 years ago, is a 38-dunam (9.5-acre) church compound located on the main road between Bethlehem and Hebron, opposite to Arroub refugee camp. It used to serve as a hospital providing free treatment to people suffering from tuberculosis until it was shut down in 1983. Jewish settlers later bought the compound from the church, through a fake company.