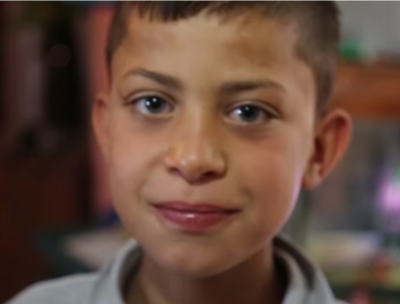 On Friday afternoon, Israeli troops invaded the village of Nabi Saleh, known as one of the centers of non-violent resistance in the West Bank, and arrested three children – two of them age 11, and the other age 12.

The abduction of children by Israeli soldiers is a common practice of the Israeli soldiers, with children as young as six years old grabbed and brutalized by the soldiers, taken to military bases, and interrogated for hours with no adult or advocate present.

According to the group Defense for Children International, around 500-700 Palestinian children are arrested, detained and prosecuted in the Israeli military court system each year. The majority of Palestinian child detainees are charged with throwing stones, and three out of four experience physical violence during arrest, transfer or interrogation. No Israeli child comes into contact with the military court system.

The majority of children are detained from their West Bank homes during the middle of the night by heavily armed Israeli soldiers. Several hours after their arrest, children arrive at an interrogation and detention center alone, sleep deprived and often bruised and scared. Interrogations tend to be coercive, including a variety of verbal abuse, threats and physical violence that ultimately result in a confession.

Unlike Israeli children living in illegal settlements in the West Bank, Palestinian children are not accompanied by a parent and are generally interrogated without the benefit of legal advice, or being informed of their right to silence. They are overwhelmingly accused of throwing stones, an offense that can lead to a potential maximum sentence of 10 to 20 years depending on a child’s age.

Samer has two older brothers, Mohammad, 19, and Osama, 22, who have been incarcerated for months in Israeli military prisons under so-called ‘administrative detention’, with no charges filed against them.

In a 2015 documentary by Al Jazeera, the mother of Samer, Manal Tamimi, told reporters, “I don’t want my children to be afraid – I try to hide my fear, as a mother, because I want them to be strong. Being afraid [while living] under occupation – you won’t be able to do anything. You will lose your life. But at the same time, I see how they are losing their childhood. I don’t want to have to talk to them about knowing their rights if they are arrested, about the tear gas – I want to talk with them about their future, about normal things. It’s kind of…. Refusing to die in silence…..My resistance is about life, about hope, about dreams, about a beautiful future.”

In the video, Manal also addresses those who would criticize her and other mothers in her village for allowing their children to participate in the non-violent weekly protests in their village. She says, “People who criticize us by saying that we are putting our children in danger – it’s not us who are putting our children in danger. It doesn’t matter what I do, they will be in danger all the time. There is a fear that the army will invade the house in the middle of the night, that they will shoot tear gas in the house, that my children will be abducted or even killed. This is life under occupation.”