Israeli Troops Abduct 3 Palestinians in the West Bank, Spit on Walls and Floors 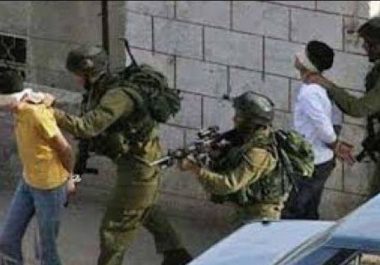 According to Wafa News Agency, among those arrested is a Palestinian child in the Beit Ummar village, north of the West Bank city of Hebron.

Concurrently, local sources in the West Bank city of Bethlehem, said that Israeli troops abducted two young men, including one with special needs.

Mayor of Nahaleen village, Sobhi Zeidan, told Wafa that “Israeli troops abducted both Mohammad Taha, who suffers from speech disabilities, after having broken into his home”.

Zeidan added that some of the invading Israeli soldiers spit all over the floors and walls of Taha’s home.

Other local sources in Bethlehem confirmed that Israeli troops invaded and vandalized the home of another young man, identified as Diya’ Zaghloul, before abducting him from the village of Husan, west of Bethlehem city.