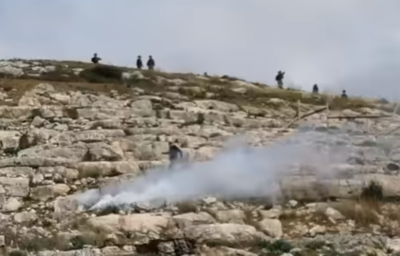 The weekly anti-settlement march called for the opening of the main village street, which was closed by Israeli military forces 16 years ago.

The coordinator of the Popular Resistance Committee in Kufur Qaddoum, Murad Eshteiwi, told reporters from the Wafa News Agency that the occupation forces fired tear gas canisters and metal bullets towards the participants in the march, which led to dozens of cases of gas inhalation, which were treated on the scene.

Eshteiwi pointed out that the march on Friday had a focus on rejecting Israeli officials’ recent statements regarding the intention of annexing Palestinian lands for the purpose of settlement expansion.

According to the Electronic Intifada, “When the road was first closed in 2003, villagers organized a single demonstration. “It was very peaceful,” Shttaiwa said. “The people left work and came, took their cars to where the barrier is [on the road], and then just sat and talked. We spoke with the soldiers and the soldiers stated to us that the road will eventually be opened.”

“When the soldiers’ promise failed to materialize, however, villagers took the issue to court in 2004. After five years of waiting, in November 2010 Kufur Qaddoum finally received a positive response from the Israeli court system, authorizing its Palestinian villagers to use the road again. At that time, however, the Israeli military groundlessly claimed that the road is “unsuitable” and “unsafe” for human traffic. After all legal appeals failed, villagers decided to organize weekly demonstrations in July 2011.

“Since then, Kufur Qaddoum has consistently held one of the most tight-knit, well-organized and well-attended Palestinian-led demonstrations against the Israeli occupation in the West Bank.”