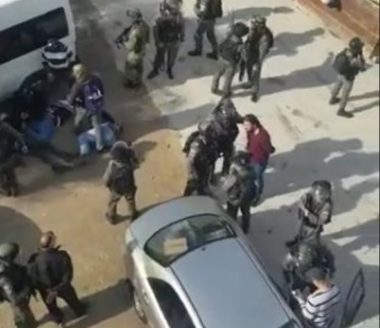 Undercover Israeli officers kidnapped, Tuesday, a young Palestinian political prisoner, after ambushing near his home, following his release from prison after serving a year behind bars, while the soldiers abducted his father, and several members of his family.

The undercover soldiers and police officers infiltrated into the al-Isawiya town, in occupied East Jerusalem, and ambushed the young man near his home, before abducting him just hours after his release from prison.

Mohammad Abu al-Hummus, a member of the Follow-Up Committee in al-‘Isawiya, said the undercover soldiers ambushed and kidnapped Anas Ali Dirbas, and took him to an unknown destination, before he was able to enter his home.

He added that more than 100 soldiers and police officers invaded the town, and assaulted many members of Dirbas family, before abducting him,

The Palestinian was abducted along with his father Ali, 60, his brother Mohammad, in addition to Saeb Dirbas, Mohammad Amjad Dirbas, Majd Bashir, Mahmoud Abed Mahmoud and Karim Atiya.

He said that the army and police have recently stepped-up the policy of abducting Palestinian political prisoners shortly after their release, and some cases instantly, in addition to imposing severe restrictions on them.