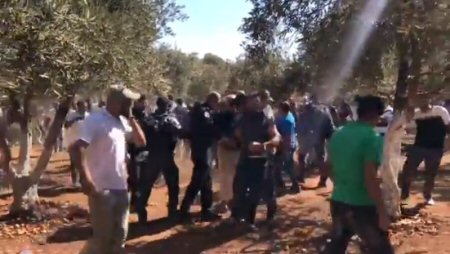 Thousands of ultra-Orthodox Jews and Israeli settlers entered the Ibrahimi Mosque compound, in the southern occupied district of Hebron, predawn Tuesday, accompanied by dozens of soldiers and police officers, and held celebrations in and outside the mosque.

According to local sources, thousands entered the mosque in successive groups and performed religious rituals, on the occasion of the Jewish holiday of Yom Kippur.

The Jewish holiday of Yom Kippur, also known as Day of Atonement, is one of the most sacred holidays in Judaism, which starts at sunset, on Tuesday, and ends at sunset, on Wednesday.

The mosque, believed to be the burial place of the prophet Abraham, is sacred to both Muslims and Jews and has been the site of oft-violent tensions for decades.

The holy site was split into a synagogue — known to Jews as the Cave of Patriarchs — and a mosque, after US-born Israeli settler Baruch Goldstein massacred 29 Palestinians inside the mosque, in 1994.
Since the split, Muslim worshipers have been denied access to the site during Jewish holidays, and vice versa, in effort to prevent violence from erupting at the holy site.

Located in the center of Hebron — one of the largest cities in the occupied West Bank — the Old City was also divided into Palestinian and Israeli-controlled areas at the time, known as H1 and H2.
Some 800 notoriously aggressive settlers now live under the protection of the Israeli military in the Old City, surrounded by more than 30,000 Palestinians.

Also on Tuesday, dozens of Israeli settlers stormed the Al-Aqsa Mosque compound, on the occasion of Yom Kippur.

A Ma’an reporter said that dozens of Israeli settlers stormed the compound through the Moroccans Gate, in successive groups to hold celebrations and perform religious Jewish prayers in the compound.

Medical sources confirmed that seven of the assaulted Palestinians and staff members suffered various bruises on the chest, back, and shoulders. The injured were immediately transferred to a nearby hospital, to receive necessary medical treatment.

Al-Dibs confirmed that Israeli forces detained Raed Zghayyar, a staff member of the Rehabilitation Committee, while in the compound, and was taken to an Israeli police station in the Old City.

Another two Palestinians were also detained from Jerusalem City by Israeli police; the detainees were not yet identified.

In total, at least 326 Israeli settlers stormed Al-Aqsa Mosque since the early morning hours of Tuesday, according to the Islamic Endowment Department.

Sources added that Israeli forces and police were deployed across the compound to provide security to Israeli settlers.

Israeli police confiscated ID’s of Muslim visitors to the compound, including women and youth, before allowing them entry.

In the videos below, Israeli forces are seen detaining a Palestinian, while assaulting many others.

Eyewitnesses said that Israeli forces and police also spread out in the Old City of Jerusalem, and across all the streets leading up to the compound.

Additionally, as a part of Yom Kippur, Israeli police began to seal off several main streets in Jerusalem and banned movement of vehicles in various areas, as well as imposed closure of crossings with the occupied West Bank and besieged Gaza.

Al-Aqsa Mosque compound, which sits just above the Western Wall plaza, houses both the Dome of the Rock and Al-Aqsa mosque. The third holiest site in Islam, it is also venerated as Judaism’s most holy place, as it sits where Jews believe the First and Second Temples once stood.

While Jewish visitation is permitted to the compound, non-Muslim worship at Al-Aqsa is prohibited, according to an agreement signed between Israel and the Jordanian government after Israel’s illegal occupation of East Jerusalem in 1967.

Despite the agreement with Jordan — which is the custodian of Al-Aqsa — Israeli authorities regularly allow Jewish visitors to enter the site armed guard.

Such visits are typically made by right-wing political attempts to unsettle the status quo at the site, and coincide with restrictions on Palestinian access, including bans on entrance and detentions.