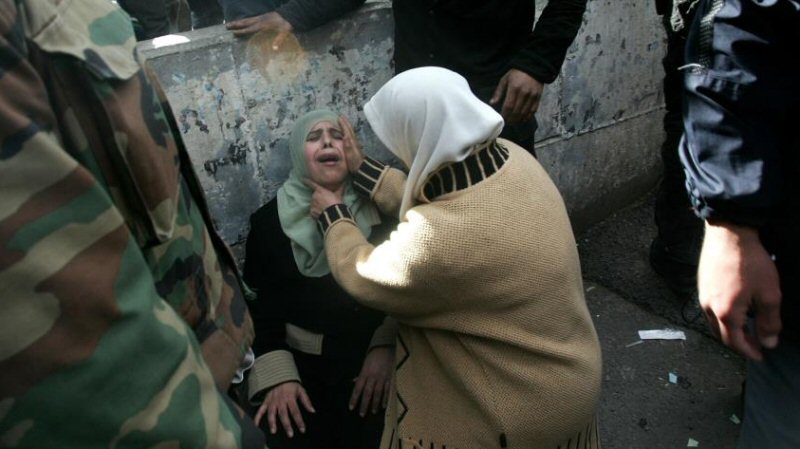 by Hanin Elholy, for Days of Palestine

It was a roasting July afternoon, and the reverberations of bombs were so continuous that her body seemed like it was vibrating in time with them.

There was no time to consider whether to don her hijab, what belongings to gather together, or even where to seek refuge. Amal blindly followed her neighbors jamming the streets of al-Shuja’eyya — pushing and shoving in their effort to flee, even without knowing exactly where they would go.

Sweating profusely while her heart raced, Amal attempted to ward off the stinging teargas by covering her nose and mouth with her sleeve. It didn’t quite work, however, and Amal sneezed and coughed, reflexively trying to spit to clear her throat.

That was in 2014, during the Israeli military’s last major assault on Gaza. But more than four years later, 46-year-old Amal still suffers fits in which she coughs and compulsively spits; trying to replace the habit with gum-chewing didn’t work. It was a behavior pattern that was particularly troublesome when Amal was trying to socialize. Despite repeated trips to ear, nose and throat specialists, relief was elusive, and her throat felt raw.

International attention shifts away when a war ends, but its victims live with the consequences — both the visible and invisible — for years after. There are many other Amals in Gaza, still suffering from past Israeli aggressions. The World Health Organization estimates that, following the violence in 2014, 20 percent of Gaza’s population developed mental health problems.

Likewise, a study of children conducted by Abdelaziz Thabet, in 2017, found that nearly a third suffered from some degree of post-traumatic-stress disorder (PTSD). Exacerbating the effects of violence are the chronic pressure from unemployment and a lack of hope for a better future.

Today, Palestine leads the Middle East-North African region in depression and anxiety disorders, with some estimates suggesting that more than 40 percent of Palestinians suffer from clinical depression, making it the highest rate in the world.

Many sufferers do not seek help due to a failure to recognize mental illness or the stigma associated with psychiatric treatment in a conservative society. Little information is available on the number of suicides or attempts, since officials are concerned about the impact on public morale, and how they would be portrayed by Western media or opposition factions ready to pounce on any sign of leadership failure.

However, the few statistics available indicate an upward trend. According to one report, there were 226 suicide attempts in 2010, 624 in 2015 and 208 just in the first quarter of 2017. Note that these numbers are likely severely understated, since many attempts are never reported.

However, as the burden becomes harder to deny, more Gazans gradually seek treatment. According to the Al-Mezan Center for Human Rights, the number of patients referred to the Strip’s sole psychiatric hospital has risen 21 percent since 2016. Likewise, the number of individuals visiting clinics with mental or emotional disturbances rose by 69 percent in the same period.

Amal is one of them. After hearing about the successful treatment of a relative, she eventually sought help from psychologist Sami Owaida. He diagnosed her with OCD (obsessive-compulsive disorder), caused by her experience during the war. Her subconscious remained stuck in a recall loop, reliving those moments among charred bodies and suffocating gas.

Relief came from a combination of antidepressants, cognitive behavioral therapy and a technique called exposure-and-response prevention (ERP). After identifying the nature and source of her fear, explains Owaida, he helped her overcome it by repeatedly reliving it until she became desensitized to the memories.

“She began therapy in October and today, she is 90 percent better,” he says.

Owaida works with the private Gaza Community Mental Health Programme, established in 1990, which has three branches across the Strip. It supplements the overstretched government system, including the one specialized mental health hospital established to serve the entire Gaza Strip — home to two million residents.

It opened in 1970, but mental health services remained dramatically under-resourced and fragmented until 2008, when the government formed a general directorate for psychological treatment. Today, the directorate also runs six community mental health centers. Among its 149 employees are 49 nurses, 14 physicians, 25 psychologists, 17 social workers, 12 pharmacists and 18 rehabilitation specialists.

After the 2014 Israeli aggression, a day care center was added.

According to Samah Jabr, a Jerusalem psychotherapist who heads the mental health unit for the Palestinian Authority’s Ministry of Health, PTSD is the most commonly diagnosed mental illness in Palestine. However, she says, it doesn’t adequately capture the nature of the Palestinian condition.

For example, “post” implies that the original trauma is over. Yet for Palestinians living under occupation or blockade, the trauma is ongoing and enduring. “There is no ‘post-traumatic’ safety,” says Jabr. Likewise, the traditional definition of “trauma” is too narrow, she says.

In addition to violence, daily and constant humiliation and objectification are equally toxic over time — for individuals, but also for a society as a whole.

Owaida agrees, pointing to the Great Return March — weekly protests in Gaza that started a year ago, on March 30. To date, 256 protesters have been killed, and more than 28,000 have been wounded. Many of the murdered or maimed young people went perilously and deliberately close to the border with Israel — seeming to be fearless.

But Owaida characterizes their true motives differently: “Their actions may seem heroic but, actually, they are a sign of a critical mental-health crisis.”

Unfortunately, he says, treatment can only help a limited amount, since it’s not possible for psychiatrists to combat the root problem: the stifling Israeli occupation and blockade.

“I treated a 10-year-old child suffering from bed-wetting (enuresis) and other post-trauma symptoms, such as attention deficit disorder (ADD), anxiety and aggression. I worked with him and his parents and teachers in a systematic parallel process,” said Owaida.

“I was making some headway — until Israel launched its third aggression, in 2014, and destroyed his home. Then, he became even worse. I needed to start treating him again from scratch.”

There also are homegrown barriers to mental well-being. Cultural beliefs discourage many Palestinians from admitting to family members, friends or even themselves, that that they need psychological help. This is particularly true for young women, who fear being labeled “mad” will discourage potential suitors from approaching them.

Many Gazans instead seek help from a local sheikh, or religious scholar, who reads them Quranic verses or healing invocations called ruqya. Owaida dismisses such remedies as “wishful thinking”.

Jabr has found that, unlike in the West with its individualistic culture, Palestinians respond better to approaches such as informal gatherings through which group therapy can be practiced. Like Owaida, she believes the key is to encourage and support remembrance, recognition and mutual solidarity.

She points to the #WeAreAllMary campaign, in support of women living in Jerusalem, as an example of a group solidarity action that acts as psychological support, as well.

“People from Palestine, and even from outside it, standing together with the oppressed and suffering is therapeutic,” says Jabr.

Some names of people mentioned in this article have been changed at their request.