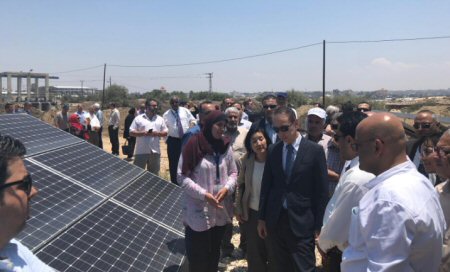 The United Nations Development Programme (UNDP) and the government of Japan, in partnership with the Palestinian Ministry of Agriculture, Palestinian Energy and Natural Resources Authority (PENRA) and the Costal Municipalities Water Utility have inaugurated the Photo Voltaic Solar System, for the Rafah Wastewater Treatment and Reuse Plants project.

The project, worth $500,000, will provide more than 170,000 Palestinians, including farmers, in Gaza, with improved access to water, sanitation and hygiene services. This will be done through the provision of 200 KWp of sustainable electricity supply that will allow the Rafah Wastewater Treatment and Reuse plants to treat the wastewater for irrigation and pump the treated water into farming areas.

Takeshi Okubo, Ambassador for Palestinian Affairs and Representative of Japan to Palestine, expressed his gratitude to all partners for making the project successful including UNDP and the Palestinian counterpart.

“For the past decade, the Gaza Strip has suffered from a chronic electricity deficit as well as severe waste water problems, which undermined fragile living conditions. Therefore, Japan provided an additional grant of $500,000 to UNDP with the aim of providing a renewable energy source as a sustainable solution to the current energy crisis which would ensure the optimal operation of the Rafah WWTP,” he said. “Japan is committed to supporting humanitarian aspect as well as long term development plans in Gaza as a friend in need and we hope this project will alleviate the suffering of people in Gaza,” he added, according to WAFA.

According to the United Nations “Gaza in 2020: A liveable Place?” report, some 90,000 CM of raw or partially treated sewage is being discharged, daily, into the Mediterranean Sea (almost 33 MCM per year). This is causing pollution and creating public health hazards.

UNDP Head of Office in Gaza, Chitose Noguchi, said: “Energy is a critical enabler for people to live a safe, healthy and productive life. Yet, the Gaza strip has been suffering from a chronic electricity deficit since 2006. Thanks to the Government of Japan, we have installed a renewable energy system that will improve public health and environment conditions. The 7000 CM of the treated water will be pumped to irrigate farming areas, benefiting almost 500 farmers and their families”.