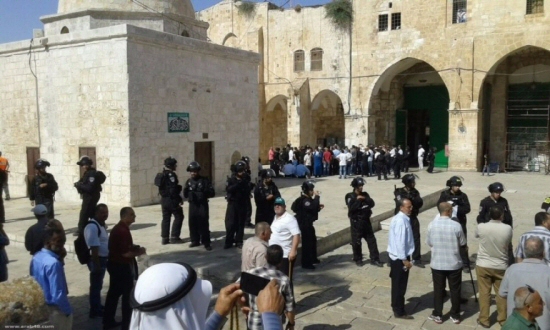 The Dome of the Rock Mosque, situated next to the Al-Aqsa Mosque, Islam’s 3rd holiest site, is located in the Old City of Jerusalem. Muslim religious officials told WAFA that Israeli police imposed a siege on the place of worship for several hours, Monday.

Palestinian Muslims arrived at the gates of the mosque, and called for the police to re-open the gates. Several hours later, the gates were opened up to worshippers; however, Israeli police detained several Waqf employees responsible for the mosques in Jerusalem. The detention of the Muslim Waqf staff, was apparently for denying the entry of the Israeli policeman into the Muslim holy site.

The Associated Press reported that spokesman for the Islamic authority, Firas Dibs, said “dozens of worshippers scuffled with police after the guards closed the doors to the mosque and barricaded themselves inside. He says the director of the mosque was lightly wounded.”