Jerusalemite Family Forced To Demolish Its Own Home 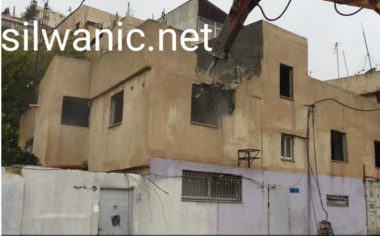 An indigenous Palestinian family from Silwan town, south of the Al-Aqsa Mosque in occupied Jerusalem, was forced to demolish its own home, Saturday,to avoid further excessive fines and fees, after an Israeli court ordered the destruction of their building for “being constructed without a permit.”

The Wadi Hilweh Information Center in Silwan (Silwanic) has reported that the family of Hasheema had to demolish its own home in Wadi Qaddoum area, in Silwan, after Israel gave it until December 10th to demolish it, or faces excessive fines and fees, in addition to the costs of demolishing their property.

Silwanic added that the home is owned by Jawhar and Murad Hasheema, who have been trying to obtain all needed permits for the least ten years, and paid more than 60.000 Shekels in fines and fees.

It said that the family eventually decided to self-demolish the home to avoid further charges, fines and fees.

The demolished property, which was built more than twenty years ago, was 140 Square/meters, and provided shelter to the two families of fourteen Palestinians.

Israel always uses the claim of demolishing the buildings for being constructed without permits.

This is happening while the City Council continues to reject most applications, in addition to the complicated procedures the Palestinians have to go through, the very high costs of filing for these permits, in addition to the extended periods the residents have to wait, and in most cases, they are denied”