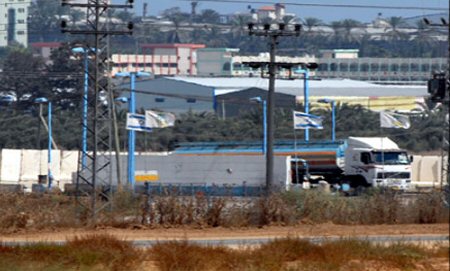 Israeli occupation authorities reopened the Kerem Shalom crossing, on Wednesday morning, and allowed the entry of trucks into the Gaza Strip.

This comes at a time when Israeli media reported that Hamas and Israel had reached a settlement that would include a ceasefire, in an Egyptian-brokered agreement.

Israeli Minister of Defense Avigdor Lieberman decided to open the Kerem Shalom crossing completely and expand the fishing area to 9 nautical miles, according to Israeli media.

Lieberman said that the situation will be monitored, with the possibility of other measures follow.

Prior to the latest moves, Lieberman and Eisenkot met with military and security officials. They decided to open the crossing and expand the fishing area if the calm continued, and indicated that a package of additional measures would be considered in a complete cease-fire situation.