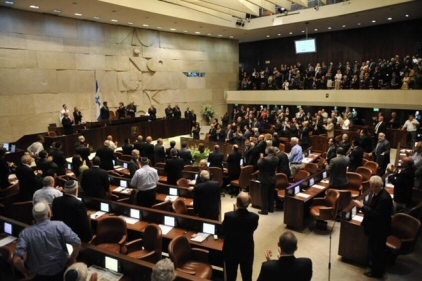 The Israeli Parliament of the Knesset voted, on Monday evening, to re-extend Israel’s “Citizenship and Entry into Israel” provision, which prohibits Palestinians from the occupied West Bank and the besieged Gaza Strip from automatically obtaining legal status in Israel or annexed East Jerusalem by way of family unions.

The law was passed 65 in favor, 14 against, according to press release published by the Knesset, on Tuesday.

The “emergency” provision to Israel’s Family Reunification Law, which grants automatic legal status to non-Israelis who marry Israeli citizens or residents, was first enacted in 2002 during the political upheavals of the second Palestinian intifada, and was adopted into Israeli law in 2003.

The law also applies to foreign nationals from Iran, Afghanistan, Lebanon, Libya, Sudan, Syria, Iraq, Pakistan, Yemen, and can apply to other nationalities originating from countries the Israeli government deems a “security threat”.

However, the law has primarily affected Palestinian citizens of Israel, making up 20 percent of the Israeli population, who commonly marry Palestinians from the occupied West Bank.

The Israeli government purported, at the time of its introduction, that the temporary measure would prevent “terrorists” from entering Israel through processes of family reunification.

However, a joint Knesset committee recommended extending the provision for the 13th year on June 1, and Monday’s vote succeeded to extend it until June 20, 2017.

During the plenary debate leading up to the vote, Joint List member of the Knesset Osama Saadi called the provision “the most racist Israel law on the books.”

An official from Israel’s internal security service the Shin Bet (the Israeli equivalent of the American F.B.I.) provided a testimony alleging that “those seeking reunification with family members in Israel pose a security risk due to the possibility that they will be used to carry out terror attacks or engage in espionage,” according to a press release from the Israeli Knesset.

The official added that 104 of these individuals brought into Israel under the law committed attacks between 2001 to 2016, stating that 17 of the 104 had come to Israel after marrying an Israeli citizen, while 87 were granted citizenship through relatives who married Israeli citizens.

The Shin Bet official also alleged that 73 percent of Palestinian citizens of Israel who had committed “acts of terror” against Israelis since a wave of unrest and violence began last fall were brought in as part of family reunifications.

Member of the Joint List Ahmad Tibi slammed the official’s case findings, stating that Shin Bet did not include even a single case of security offenses committed by rejected applicants for family reunification into the study.

“This proves that the law is not based on any security-related concern. It is only implemented because [Shin Bet] views a love story of a Palestinian couple as a plot against state security,” Tibi added.Saadi also countered claims made by the Shin Bet official, saying that 29 of the 30 people involved in attacks were residents of annexed East Jerusalem who do not obtain their legal status through family reunification, Israeli daily Haaretz reported.

”In practice, barely one out of every 1,000 people who carried out terror attacks since 2003 are living here by virtue of family reunification,” he he said during the debate.

Although the Israeli Supreme Court prevented the provision from being introduced as permanent legislation, the Israeli government has renewed the temporary security measure every year since 2004.The law was revised in 2005 to allow for Israel’s interior minister to grant exemptions under the law for Palestinian women older than 25 and older than 35 for men from the West Bank to obtain temporary permits to reside in Israel.

However, the permits would not provide married civil status or any social security rights, according to Israeli human rights group Hamoked.

The group is one of many that have condemned the law, calling it a “racist” provision that discriminates on ethnic origin.

“It also authorizes collective punishment by stipulating that applications may be denied if it is claimed that the non-Israeli applicant or anyone from her/his extended family might be considered a security risk,” Hamoked stated in a past report.

Human Rights Watch noted, in 2012, the stark imbalances inherent in Israel’s national immigration policies when applied to Palestinian citizens of Israel and when applied to Jewish citizens.

In addition to the Israeli government automatically granting non-Jewish foreign nationals Israeli residency or citizenship, over four-year periods if married to a Jewish citizen of Israel, any Jewish person is granted automatic citizenship in Israel, regardless of marital status, under Israel’s 1950 Law of Return, the rights group highlighted.

The provision has also been strongly denounced by left-wing Israeli government officials, who see the law as a discriminatory act against Palestinian citizens of Israel who are much more likely to marry a Palestinian from the occupied Palestinian territory.