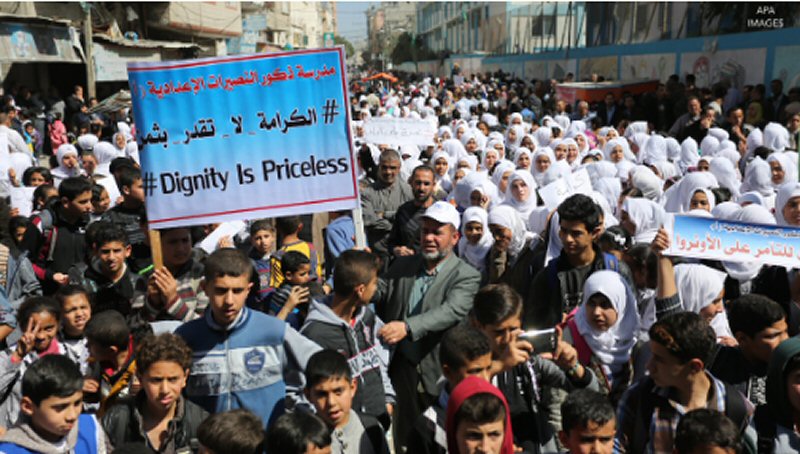 The US administration is waging an assault against Palestinian refugees. Diplomatic, legal, and financial measures – mainly engineered by President Donald Trump’s son-in-law and senior advisor, Jared Kushner – aim to take the Palestinian refugee question “off the table” and thus crush Palestinian claims to repatriation and reparations before the unveiling of the “Deal of the Century.” The administration’s approach is two-pronged, using financial restrictions as well as diplomatic and Congressional pressure.

Since December 2017, Kushner has been attempting to dismantle the United Nations Relief and Works Agency (UNRWA), whose purpose is to provide food, health care, education, and other vital services to 5.3 million Palestinian refugees who were expelled from their homes during the Nakba in 1947-48.

Kushner has orchestrated a string of cuts to UNRWA that have brought the organization to the brink of collapse. In January 2018 the administration slashed the first $125 million installment of its annual payment to UNRWA by more than half. Last week, the US announced that it will no longer contribute to UNRWA at all, deeming it an “irredeemably flawed operation” and sending shockwaves around the Arab world.

The White House has also asked Congress to withhold the $200 million in US aid given to private relief groups and non-governmental charities (such as Mercy Corps) operating in the Occupied Palestinian Territory (OPT).

Simultaneously, Kushner is seeking to reconstitute the status of Palestinian refugees. Israel and its US allies accuse UNRWA of perpetuating the refugee question and bolstering the Palestinian right to return by granting refugee status to the descendants of those expelled during the Nakba. The US “solution” to this is to strip these descendants of their refugee status. This would allow UNRWA to only serve the estimated 20-30,000 surviving refugees (a number that would decrease with each passing year), discontinue UNRWA operations for descendants, redirect funds to host countries for “resettlement,” and extinguish all possibility of return.

A bill in Congress attempts to codify this new formulation. HR 6451 stipulates that only the surviving refugees qualify for resettlement and UNRWA services. The rest of the aid would be channelled to the US Agency for International Development (USAID), which is bound by the 2018 Taylor Force Act, prohibiting US aid to the Palestinian Authority until certain conditions are met. The bill has been referred to the House Committee on Foreign Affairs.

The intention is not solely to gut the humanitarian infrastructure that supports vulnerable Palestinian refugees, but to fundamentally alter the way that Palestinian refugeehood is understood and handled. The manipulation is not only short-sighted, but fundamentally incorrect: According to the UN High Commissioner for Refugees, descendants of Palestinian refugees are recognized as refugees. The approach also misdiagnoses UNRWA as the source, rather than the product, of the refugee reality, which will not go away, even if UNRWA is dismantled. Instead, millions would be left without education, work, food, and health care.

Kushner is gambling on Palestinians’ acquiescence, but the stakes are high for all involved, and Israel stands to lose if UNRWA services are withdrawn. According to the Fourth Geneva Convention, Israel, as an occupying power, is legally obligated to provide food and medical supplies in addition to ensuring the public health of the occupied population. Withdrawing UNRWA support in the OPT would leave a vacuum that Israel would be obliged to fill. Judging by its track record, compliance seems unlikely.

Underlying Kushner’s approach is the desire to stamp out Palestinian claims to sovereignty and repatriation – a right afforded to refugees worldwide. So-called final status issues, such as Jerusalem, settlements, and refugees, are considered integral to finding a negotiated “solution” to the Palestine-Israel conflict. But the right of Palestine’s displaced inhabitants to return to their land, as enshrined in UN Resolution 194, has long been the most contentious aspect of the conflict because it radically challenges the Zionist nation-building project itself – a project premised on Israeli-Jewish supremacy from the Jordan River to the Mediterranean Sea.

1. Pro-Palestinian constituents and civil society members should raise awareness of bills that threaten Palestinian refugees. They should particularly work with members of Congress who are increasingly critical and vocal about Israeli rights abuses. They should seek to ensure that money allocated for Palestine is spent and push back against the Trump administration’s attempts to circumvent the law. For instance, the administration is attempting to place the $200 million in aid mentioned above into a “rescission package” to avoid spending it – a step Congress is required to sign off on.

2. Critical members of Congress and civil society should keep a close eye on the Trump administration’s settlement policy. With the “handling” of such final status issues as Jerusalem and refugees, as well as the close personal, economic, and political ties between some members of the administration and the settlements, taking the settlement question off the negotiating table may well be next on Kushner’s list.

3.Other nations should continue to increase their financial and diplomatic support of UNRWA, recognizing the critical moment in the region and the unjust and cruel repercussions for Palestinian refugees.

Zena Agha is Al-Shabaka’s US Policy Fellow. Her areas of expertise include Israeli settlement-building in the occupied Palestinian territory with a special focus on Jerusalem, modern Middle Eastern history, and spatial practices. She has previously worked at the Economist, the Iraqi Embassy in Paris, and the Palestinian delegation at UNESCO. In addition to opinion pieces in The Independent, and The Nation, Zena’s media credits include the BBC World Service, BBC Arabic and El Pais. Zena was awarded the Kennedy Scholarship to study at Harvard University, completing her Master’s in Middle Eastern Studies.

Opinion/Analysis 08/28/18 Palestine Refugees: Beyond the Numbers