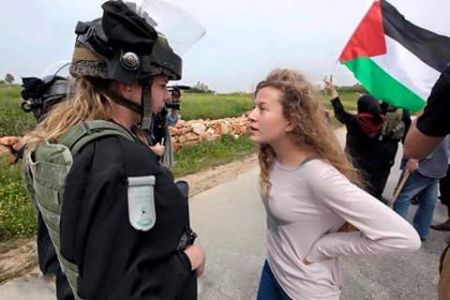 On Monday night, Geffen released a short poem to his Instagram account in which he compared imprisoned Palestinian teenager Ahed Tamimi to famed Jewish holocaust victim Anne Frank, David of the Biblical David and Goliath, and historic war hero and Catholic Saint, Joan of Arc.

“A pretty girl 17 years old did a terrible thing,” Geffen’s poem reads. “…on the day that the story of the struggle will be told – you, Ahed Tamimi… You will be in the same ranks as Joan of Arc, Chana Senesh and Anne Frank.”

In a fiery Facebook post, Liebermann condemned the poem and called on Israeli media to boycott the 70-year-old poet, according to the PNN.

“The State of Israel will not give a stage to a drunk comparing a girl who perished in the Holocaust and a heroine fighter who fought against the Nazi regime to Ahad Tamimi,” said Liebermann.

Liebermann was quickly rebuffed by Attorney General Avichai Mandelblit, however, who refuted Liebermann’s legal authority to interfere with the Army Radio broadcast.

“The legal authority to determine the content of the station’s broadcasts is only in the hands of its professional officials,” said Mandelbit.

The position of Army Radio Commander is appointed by the Ministry of Defense, and whose current commander, Commander Shimon Elkabetz, Lieberman called on directly, to see Geffen banned, according to his Facebook post.

This is not the first time Geffen has been embroiled in controversy. In 2015, Geffen was the victim of a home invasion after a series of posts likened the re-election of Israeli Prime Minister Benjamin Netanyahu to the Nakba.